This is my top 5 list for strategy games, which depict the Medieval times.

Are you as eager as me in playing medieval games as an empire builder? Do you also like to control the nations which lived hundreds of years ago as dynasties, realms, theocracies, etc…? In my top 5 list of best medieval strategy games, you will find different games of different tastes, so I shall say “Bon appetit!”

Highlight of this lense is dedicated to the newest FREE TO PLAY medieval strategy browser game called Dark Age Wars! Its a splendid online war game, completely FREE to play! How does that sound?
You start off as a king returning home from the crusade wars. You must then start to build up your kingdom. This involves building your infrastructure, developing an economy and building a mighty military. In this game you can build various buildings (from blacksmith to quarry), build various units (from battering rams to longbow archers) and you can also team play through alliances and attack other players online on a map of EUROPE!

If you’re a dedicated Medieval ages gamer and you like some real live competition, I am definitely reccomending you to try this new medieval strategy game.

Play it now for free!

Very unique and lots of fun with this game, highly recommended.

Knights of Honor is played on a map of Europe, all the way to Scandinavia and Northern Africa.The playground or the map is divided into provinces, which are governed by a city that contains several rural areas called Towns, Farms, Monasteries. The rural areas are not alterable and are random over the map, while in the city you can build sveral buildings which can give you bonuses to rural areas as well.

The constructions can increase piety when the church or a monstery is built, or increase income if the market is built in the city. You build also other special buildings as apiary, to make candels as a special items or defence buildings or military unit constructions. You should carefully consider what you’ll build since some cities have some extra special resources, while the city itself has a limited options to build on ( boxes ). Compared to other strategy medieval games, Knights of honor can be played several hours, since the gameplay is very diverse.

The game also has everything you need. I’d say this game is a fine example how a good game should be, something in between classical Paradox games and all time favourites Total War series. The graphics aren’t really something to brag about, but its the functionalities and the charisma of this game will take your hours away, before you even notice. Also if you like medieval music, I bet you’re going to love the soundtracks in this game.

Another masterpiece from Paradox 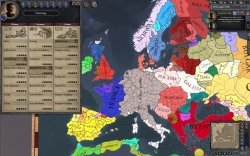 The game Crusader Kings 2 is a medieval dinasty simulator which comprehends an era between medieval times of 1066 and 1453. You can use several options how to achieve victory as they did in medieval times, through thoughtful marriages, assasinations, briberies etc. The game is very geneticaly/trait/genealogy motivated, where you can raise childs or give some of your vassals to “train” them, and they will get the same special skils as their mentors and which they can use in later life. Thread and choose carefully that you don’t give your prince to your enemy, so he can use it against you, or bribe your enemies by having them marrying one of your daughters, options are unlimited.
Choose carefully your offspring since they will lead your family in the future, your vassals might love them or hate them – it all depends on their charisma and traits they have achieved in earlier life and present. There are five levels of Vassals you can have, Barons ( who hold castles ), Counts and Earls ( Which hold a county or an earldom ), Dukes ( who hold a duchy in your kingdom ) or a King, Emperor ( Queens and Empress if you don’t have a male successor )Empires are rare, since in that times there were only two notable Empires called Byzantine and the Holy Roman Empire, so choose well how you will start your game and establish your alliances.
Crusader Kings II is the latest Paradox pearl released. From my point of view its one of their best map based games. The only negative thing about this game is that you cannot play certain countries. This game has also an outstanding soundtrack compilation.
A MUST have!

If you’re a game of thrones fan, then you should not miss this opportunity!

In the land of Ice and Fire, nine great families of Westeros struggle to control the Seven kingdoms.
Take control of a noble house of your choice, would it be the Starks of Winterfell or the Lannisters of Casterly rock, defeat your enemies and conquer the Iron throne!

Stronghold 2 is a Real time strategy, a popular one indeed, since it has many loyal fans over the years, until the release of unfamous Stronghold 3. In Stronghold 2 you develop your lands and strongholds at your will in the medieval ages, its also a sequel of the original tital Stronghold released earlier in 2001.

You play as a lord who rules a medieval plot or a land, where you can build your own castle, with your available resources with different buildings and features, including several kinds of productions ( food, armours, weapons ). You can build many different kinds of industrial, civil, military and defence buildings, also traps, to trap your enemies while they want to climb your wall.Work management is quite easy, since when you construct a building, your peasants will automatically choose their work, so micromanagement is minimal. Make sure you build as many hovels so you can have as many citizens as you need to hire them for soldiers or work.

There is also an addition in this sequel which includes estates, which a buyer can buy with his honor, which he has accumulated through the game by popularity, feasts, jousting etc.
Estates are independent villages where you can still build your “civ” constructions. They can give you several pluses in the game, since you can choose to send their food, wood and other resources back to your original castle for your own needs.

The 3D graphics make this game very nice to play, the option to build your own custom castles is amazing, since the battles are very interesting, and the graphics are much more better in this sequel.

You can play several options/modes in this game as, Kingmaker, Peace Campaign, War Campaign, Skirmish or Freeplay, Custom scenarios and Multiplayer.

Well who can forget about Stronghold. If you’re man of action and like building a castle, this game is for you. This game has a nice and interesting campaign, while it lacks the option of diplomacy and so many other micromanagment things, which are quite popular these days.

Stronghold 2 will surely make you busy for a long time, the game is a unique masterpiece which by my oppinion wasn’t even surpassed by its a little “buggy” sequel Stronghold 3.

One of the best RTS ever made

Medieval II: Total War, is the game Sequel of Medieval Total War and the fourth game in the series. Its turn map based and RTS orientated in the live battles, so you can choose and take your armies against your enemies in medieval times in LIVE COMBAT since the graphics are very well made.The game is playing in the era between the year 1080 and 1530, so you have plenty of time, to conquer and vanquish your enemies. The game itself is very focused on medieval warfare, politics and religion in Europe, Middle East and Northern Africa. There are several mods and Expansions, which will lead your game also to the experiences of finding the New world where you can fight Mayans, Aztecs and all other American tribes, or play as a Crusader in Crusader Wars. Similar to this game is Rome: Total War where you can play as a Roman conqueror or their enemies in Ancient times.Similar to previous titles of the Total War series, the game consists of two modes of play: battles and single-player campaign. Battles can be played in multiplayer, in user-defined scenarios, or in historical scenarios which simulate real battles such as the Battle of Arsuf or the Battle of Agincourt. Battles are also featured in the campaign.

This game is breathtaking. The option to fight your own battles with the tactics you make yourself, really makes you feel like a grand General.
Like every Total war series game, this game is/will absolutely make you addicted. Though the game battles are something really to congratulate, I really miss something like micromanagment, some higher option of diplomacy and not to forget, option to build your own custom castles, this game would probably be perfect in any sense.

Europa Universalis III is a map strategy game played on the map of Europe and consists some of the Areas in Northern Africa and Middle east.You as a player control a nation of your choice and handle matters concerning diplomacy, trading, wars and economic handling.

The game itself without expansions starts in the year of our Lord 1453 when the Constantinople falls to the Ottomans and it ends near the beggings of the French Revolution. There are several expansions in this game, most notable is the Napoleons Ambitions which expands your game to the late year of 1821, you can also play the expansion In Nomine, which starts back in the year 1399.

Europa Universalis 3 has a big map which compromises 1700 land plots and several sea provinces in the world and can be played with 250 different nations, which you can choose. The game has a lot ingame elements as their other similar games as Crusader Kings, Victoria and Hearts of Iron – these games are also very nice to play.

What to tell about Europa Universalis III? Its a grand game on a world scale. So many kingdoms and options, but I really miss some actual combat in this kind of series. If you’re a board type of player, you will probably love this game and will never let it go.

Age of Empires 2 : Age of Kings

If you don’t mind a little older games, which still fall under medieval strategy games genre, then you should definitely pick Age of Empires 2 also.AOE2 or Age of Empires 2 : The age of Kings was released in 1999 by Microsoft and its the sequel to the ancient time oriented Age of Empires.

This medieval strategy games has also and expansion called “Conquerors” which was released in 2000. Age of Empires 2 focuses like allmost every other RTS game, on gathering resources, creating armies and destroying your opponents units and buildings, as you “advance” through the medieval ages.

There are five campaigns in this oldie goldie, which encompasses Genghis Khan’s big dream of Eurasia, Barbarossa’s crusades, saracen Saladins campaign, Joan of Arcs story and the amazing William Wallace fight for freedom. As a player you’re allowed to choose over 13 civilizations, with different units and architectural styles.

Lords of the realm is a turn-based medieval strategy game released by Sierra. This game is quite different from other strategy games, as it has no technology tree, but you have to carefully manage food, happiness and population levels, while you create your kingdom and expand it. You grow crops, manufacture weapons, manage armies, build and lay sieges to castles in order to attempt to conquer your enemies. While you’re in the battle this game turns into a RTS game with an option to control your units individually or in formations.
Compared to the original, Lords of the Realm1, Lords of the Realm 2 is much more robust, with better graphics and music, and an improved management system, but it lacks the option to build custom castles as you could do in the first version of this game.